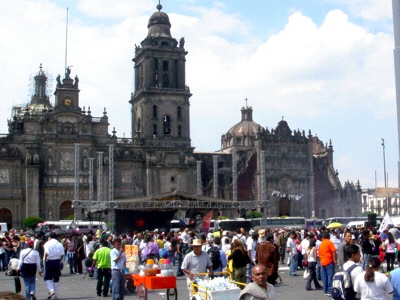 Our first stop after breakfast was the Zocalo.  A town square, it has changed quite a bit over the years.  Originally paved by Cortez, the most recent changes involved removing just about everything from the square. (trees, monuments, etc.)  The only thing that remains is a giant flagpole and an enormous mexican flag.  That is not to say it is empty.  The square is filled with street vendors, performers, protesters, students, beggers, and tourists.  The Zocalo rests in front of the oldest cathedral in Mexico.  It’s construction took over 200 years beginning in the 16th century using stones stolen from an Aztec city that originally occupied this area. 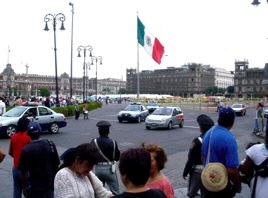 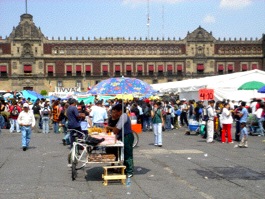 After viewing the Cathedral, we jumped on the subway to get downtown to the Plaza de Computation.  A cross between Frys Electronics and a swap meet.  Before you even get inside you pass dozens of street vendors selling everything from cell phone chargers to pirated copies of Final Cut Pro or Lost.  I was too busy ogling to take pictures.  We came for a purpose, to buy me a new hard drive (remember, i broke my laptop in Culican).  After that we head to a certain Sears shop with a coffee shop with a spectacular view of the Palace of Fine Arts.  Another piece of amazing architecture you cannot seem to go two blocks without stumbling upon.

After that we did a bit more sightseeing before deciding to take a cab back to the apartment instead of the subway.  It’s a good thing too, because almost as soon as we get in the green VW Beetle with no front seat, it starts to rain.  By the time we get home, it is really pouring