I visited this idea months ago, but for anyone who implemented it, it has been a nightmare.  Each subsequent Unifi controller update broke the https in new and exciting ways.  After remaining a very squeaky wheel with Ubiquity support, they’ve pushed out a version that should permanently resolve the problems. They even made promises of native Let’s Encrypt support.  All this will prove true of false with time, but for now i wanted to share my working procedure for Unifi controller version 5.9.32.

This solution required me to become more familiar with Java’s keytool then i would have otherwise.  Unifi has a hardcoded keytool path and password, don’t change that (thanks Corey F @ubnt). i don’t think alias matter, but they must be consistent.  I used mykey.  We start by generating a key and a code signing request for our domain.  For permissions reasons, we will want to do this as root. . .
cd /var/lib/unifi
keytool -genkeypair -alias mykey -keyalg RSA -keysize 2048 -keystore keystore -dname "CN=custom.domain.name" -storepass aircontrolenterprise

Now we run the interactive certbot script to prove the domain is actually yours before they hand out a cert.  Follow the instructions you can use DNS or hosting a file to verify.
certbot certonly --manual --csr custom.domain.name.csr

END_OF_DOCUMENT_TOKEN_TO_BE_REPLACED

UPDATE:  this is all outdated, go here.

I have been consolidating some of my sites onto a single hosted Unifi controller.  Documentation was outdated so I am going to post some useful info here. My original plan was to setup a basic apache2 site, use certbot to generate my certificates and then install them into the Unifi controller. The first frustration is that you cannot simply install the certs you want into the unifi controller.  second frustration, java.  once you get over that, it’s super easy.

I had some issues with the initial migration.  i ended up having to start over.  handy command to remove unifi controller with all it’s configuration and data. apt-get remove unifi --purge Just remember, you will need to reinstall Unifi after. It will be bran new and back to the wizard.

END_OF_DOCUMENT_TOKEN_TO_BE_REPLACED 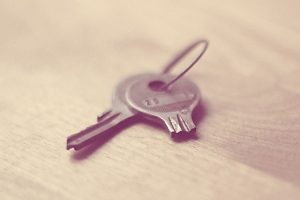 I just assumed that the problem was related to my recent SSL renewal.  Turns out, Google security recently published Distrusting WoSign and StartCom Certificates and removed them from chrome.  How did I miss this?  It turns out that the SSL on my site has been broken on Chrome for some time.  It must be that I have been using Brave recently as my daily browser.  I moved this site to letsencrypt.org and it’s working fine for everyone now.  I don’t even know how much time I waisted on this one.  wow.

Please excuse all the errors while i try and figure out what I did wrong. Brave, Firefox, and Safari users unaffected.

https://letsencrypt.org/ Has opened up their beta to anyone.  Sign up and get your cert today.

Brought to you buy: 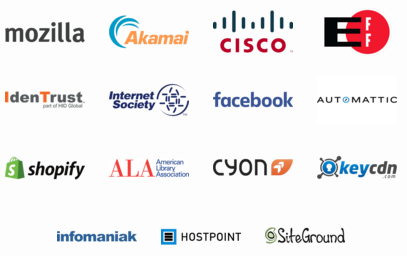 My blog is now distributed with Amazon’s Cloudfront CDN using powerful encryption and signed by a proper CA certificate.  See the shiny green lock?  Like a grown-up adult website.  After only 8.5 years.  Congratulations!  Thank you StartSSL!

Update:  you may have noticed that the transition has been a bit bumpy.  Still getting the hang of things and this website needs a lot of work (possibly a complete resurfacing).  I am sorry about the downtime and all the SSL errors, I am working on it.  Thanks Eric, I hope I didn’t step on your birthday plans kidnapping your brain. 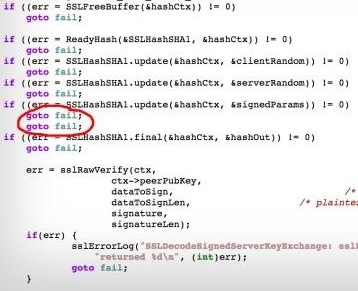 The security community went into a frenzy this weekend over Apple’s latest iOS security update. On Friday, Apple quietly released iOS 7.0.6 and 6.1.6 to patch a bug in its SSL implementation. This particular bug nicknamed “goto fail” for the actual contents of its source code behind the error.  Basically, one too many goto fail causes the fail not to be conditional, but absolute.  This failure allows Apple’s SSL framework (the technology that secures web transmissions) to be easily bypassed.  In other words, Safari, Mail, Calendar, Software Update, as well as any 3rd party applications who take advantage of Apple’s SSL libraries could potentially have their communications intercepted by an unscrupulous individual.  Apple claims that it is a type-o, but many wonder if this might be a deliberate backdoor (one that has lasted over a year).

The real tragedy of this issue is that it effects Mavericks (Mac OS 10.9.x) as well as iOS, .  Update Published by Apple!  Apple desktops, laptops, and iMacs  were left in a very dangerous position: unprotected to a known threat.  I am sure that the bad guys are already configuring their sslstip, sslsniff, or similar tools.  Accounts will be compromised, communications will be intercepted or manipulated, or in the case of software updates, malware could even be introduced.

What can we do?  First off, run the 7.0.6 update on any iOS devices not yet up to date.  Do this from a trusted wifi, not a public one.  With your mac, avoid public wifi until this is resolved.  Avoid Apple Mail except when absolutely necessary and only from trusted networks.  Only use Google Chrome for secure web browsing (it uses its own SSL framework).    Run Apple 10.9.2 update!

all the ssl blacklists are updates. we can return to thinking we are safe. Apple included the patches in a Security Update, Firefox updated to 6.0.2. Jailbroken iOS users can update or install “sslfix” in Cydia to get the protections that apple has yet to release.

After watching Moxie’s BlackHat talk, we seriously need to fix SSL. It is holding up too many technologies to be this insecure.

In the mist of  #antisec and on the heels of the Vegas Hacker/Security conferences, another CA (DigiNotar) was hacked.  This time the hackers got Google’s security certificates.   With that criminals could use a technique known as a Man in the Middle attack to impersonate google and nothing can stop them.  Personally i have heard @ioerror rant about the fundamental flaws of our present SSL system.  Perhaps this will help bring about a change more quickly but for now we can blacklist the offending certificates.  here is how (on a mac)

To protect Safari, the solution is, apparently, to run Applications/Utilities/Keychain Access, click on “System Root” on the upper-left, and “All items” on the lower-left, then type “DigiNotar” into the upper-right searchbox, then doubleclick on all the certs that show up (you may only have one), open the “Trust” detail area, and change “When using this certificate” to “Never Trust”, then close the dialog box.

For Firefox users, go to Firefox’s Preferences, click on Advanced, then the Encryption tab, then click on “View Certificates”, click on the “Authorities” tab, scroll down to DigiNotar, click on “DigiNotar Root or CA”, then click on “Delete…” or “Delete or Distrust…” below (depends on your version).