Exciting to see a new player on the jailbreak scene.  This new player brings drama we haven’t seen since Zibri left the scene.  Wrought with the threat of malware and with the inclusion of a pirated App Store this jailbreak has certainly raised many questions as to the safety and legality of the software.  It’s installation is easy enough.  Nearly as simple as the evad3rs jailbreaks.  The main cravat is the inclusion of an expired corporate code signing certificate.  This requires that you set the date on your device to June 2nd and also to verify that you want to run an application from developer “iPhone Distribution:  Hefei Bo Fang communication technology co. LTD.”

It seems that much of the drama stems from the source of the bugs used to complete the process.  @i0n1c has been quite vocal about the whole thing.

Pangu makes no attempt to conceal what they did.  Thanking @i0n1c right on their app, even linking to his twitter feed.  They are not exactly claiming credit for his work, nor do i see how they are making any money from the release of this free jailbreak.  I understand that no permission was given to release this privileged info to the public, but i am glad that someone used it to release a free jailbreak.  Better then the current elevat0r to nowhere.  UPDATE:  pangu released 1.1 version of jailbreak removing @i0n1c’s info leak bugs and fixing boot loop issues experience by some users.  Not a great idea to burn more bugs, really no purpose at this point. Also, english release makes it easier for me to read.  UPDATE:  Apple released 7.1.2.  Pangu jailbreak includes 7.1.2. 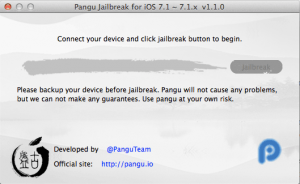 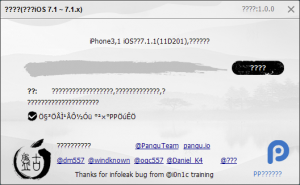 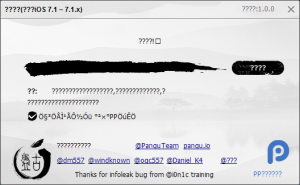 Lets see what the experts say. . .

Here are a few screens from the process.  I wasn’t quick enough to grab the startup screen with a thank you message.  Presently, the installer only runs in windows, but it can even be done with virtualization.  They claim a mac version is coming soon now avaliable.  pangu.io or english version:  en.pangu.io 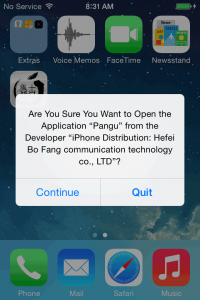 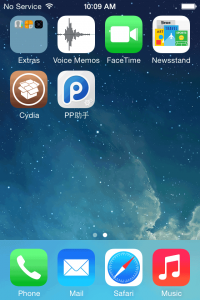 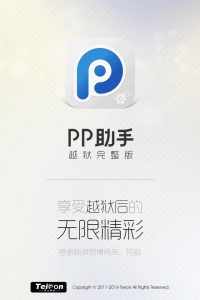 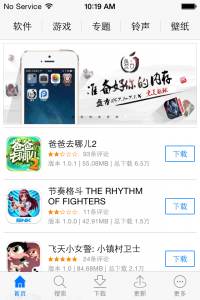